Virginia Dare: A Statue with a Story 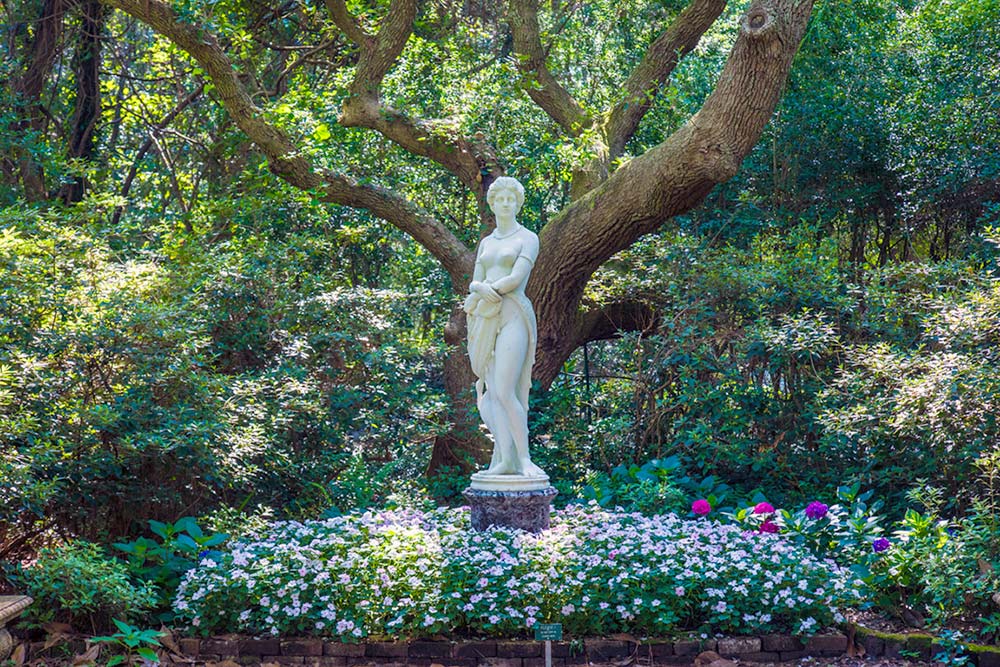 History, mystery and fantasy are combined in the beautiful Elizabethan Gardens which  are a memorial to the valiant men and women who, as English colonists, came to Roanoke Island from 1584-1587 and walked “away through the dark forest into history” as the Lost Colony.

History remembers Virginia Dare as the first child born of English parents in the New World. In August, 1585, twenty-two years before Jamestown, 108 Englishmen under the far-reaching hand of Sir Walter Raleigh, managed to sail into what is now called Roanoke Sound and came ashore on an island called Roanoke in what is now Dare County, North Carolina. Having found a safe harbor between the mainland and the Outer Banks, they chose an area covered with live oaks on Roanoke Island overlooking the Roanoke Sound as the site for the first English colony in North America. Later this group returned to England. 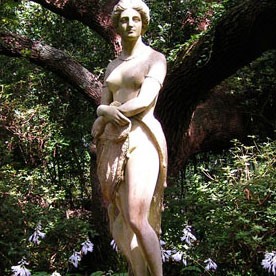 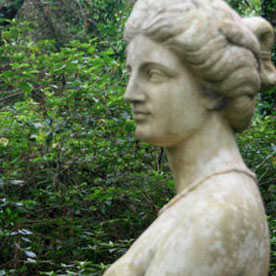 Two years later, Raleigh sent a second ship of colonists, this time including women and families. Several weeks after their arrival in July of 1587, Eleanor Dare gave birth August 18, 1587, to a baby girl who was named Virginia after Elizabeth I, England’s Virgin Queen. It was also a name befitting the first English child born in the wilderness of the New World.

Ten days after the birth of his grandchild Virginia Dare, John White, governor of the colony, returned with the ship to England to secure additional supplies. The colonists were left to fend for themselves without the unifying strength of their governor, without the additional supplies and adequate skills in how to deal with the wilderness of a strange and alien land; the various Indian tribes and the whims of nature in this area which vacillated from drought to hurricanes. Because England was at war with Spain and involved in the defeat of the Spanish Armada, Governor John White could not return immediately with his ship of supplies. When he finally was able to return three years later in 1590, there was no trace of the colonists and no visible evidence of a struggle. On a post near the entrance to the settlement the bark had been peeled off and a single enigmatic word carved into the wood – CROATOAN. Possibly this referred to a nearby island of that name or the Croatan Indians who were considered friendly. There was no sight of a cross which had been the prearranged signal of distress. No trace has ever been found of these colonists in subsequent years.

The poignant mystery surrounding the child Virginia Dare lost forever in the great American Wilderness caught at the imagination of Maria Louise Lander of Salem, Massachusetts, and American sculptor. At a very early age, Miss Lander displayed a noticeable ability to fashion wax heads for her broken dolls and so her family decided to support her efforts towards an artistic career. In her late twenties (she was born in 1826) she sailed for Rome where she established her own studio and produced two of her most famous sculptures – Evangeline and Virginia Dare. It is significant that Louise Lander created the figure of a heroine, not from Greece or Rome, but from a haunting legend in her own country.

Using a large pillar of white marble from the quarry of Carrara, Miss Lander began to chisel endless markings of this finely grained stone. After fourteen months of labor, she completed her statue and placed it aboard a sailing vessel en route to Boston. The vessel encountered a severe storm off the coast of Spain and was wrecked, sending its cargo to the bottom. Two years later the ship’s cargo was salvaged, inclusing the statue of Virginia Dare, and Miss Lander was forced to buy back her statue which she restored to its original beauty and exhibited it in Boston where it was greatly admired.

A New York collector reportedly bought it for the sum of $5,000 and brought it to his studio which caught fire and Virginia Dare was again in danger of being destroyed but was saved by a pair of folding doors that were closed. The New York buyer died, the executors refused to confirm the sale, so the statue went back to Miss Lander.

Miss Lander was sixty-seven, her health was frail although she would live for many years more. She loved the Virginia Dare statue. It was her pride and joy and now it was a friend. Miss Lander decided to keep the statue until her death and will it to the State of North Carolina. Three years after her death, in 1926, the statue was formally accepted by the State and exhibited in the Hall of History in Raleigh for all to admire its artistic beauty and form. But it became a controversial work of art, some not being able to see art in a half nude maiden clad in a fish net and complaints came to the Department of Archives and History that the statue was obscene. The fact that it was placed beneath the portraits of three Confederate Generals did not help either!

In 1938, the Hall of History moved to its new home in the Education building and all historical effects were taken except for Virginia Dare. Whether intentional or not, she was left behind in the basement of the old Supreme Court Building. Later she made her way to the office of the late George Ross Pou, State Auditor, where she again became the topic of conversation. One Raleigh newspaper at the time stated: “A Marble Lady, clad only in fish net, whose downs have included one resting place deep under the water off the coast of Spain, and another resting place in the dingy basement of the Supreme Court Basement, is up again!”

When The Lost Colony drama was written by Paul Green it was decided to send the statue of Virginia Dare to Roanoke Island to be placed in the waterside theatre. In the meantime, Fort Raleigh had become a national historic site and National Park Service officials frowned on the statue being placed at this historic site since there was no authenticated record that Virginia Dare ever lived to maidenhood so the statue remained in its shipping crate backstage at the waterside theatre until after World War II when Albert Q. Bell, builder of the theatre, decided to send it to author Paul Green at his Greenwood Estate near Chapel Hill.

The Pulitzer prize-winning Green never got around to erecting the statue on his estate. The Elizabethan Gardens were created on Roanoke Island in the early fifties, and Green decided to send the statue to The Gardens to be placed with the famous statuary from the Whitney Estate of Thomasville, Georgia. And so the Virginia Dare statue, surviving shipwreck, fire, abandonment and rebuff, finally came to rest in The Elizabethan Gardens almost one hundred years after her creation.

Today the ‘maiden of mystery’ stands in her own niche at the foot of an ancient live oak, one of the same species of sea-battered oaks that existed in the area where she was born. She gazes dreamily beyond the trees toward the softened surge of nearby Roanoke Sound. Instead of schoolbooks, she holds a fishnet draped around her waist. About her neck and arms she wears the Indian laces of an Indian princess. Instead of a royal greyhound, a royal heron accompanies her.

An Indian legend persists that Virginia did grow up among the Indians and that her spirit roams Roanoke in the form of a white doe. Whatever one elects to believe, Maria Louise Lander’s sculpture of Virginia Dare stands serenely fixed in The Elizabethan Gardens today, a figure of quiet hope, wide-browed and intelligent, the first child of the first colony of Elizabethan England, gazing toward the future despite all the odds of the history, mystery and fantasy that surround her. 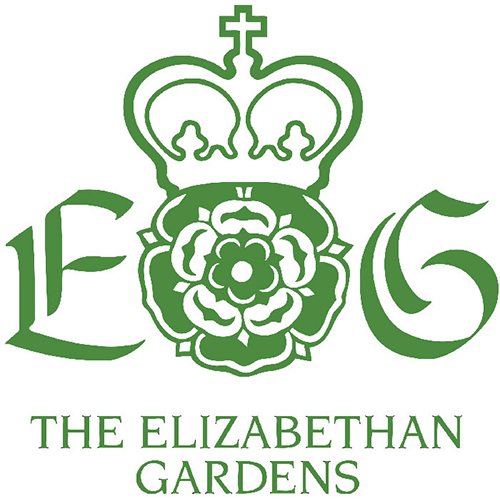